In 2013, the Festival worked in collaboration with Maya Salganek, faculty in the UAF Film Department and her students to conduct some interviews of participants and past participants.   Retired UAF faculty member, Terry Tomczak, shared how she was teaching a folk dancing class in the early 1970s and one of her Alaska Native students from an interior village asked, “Why aren’t any of our songs being taught?’   That single question sparked a discussion which eventually led to the Festival of Native Arts.

The Festival of Native Arts will be holding their Fall Fundraiser at The Morris Thompson Cultural and Visitors Center on Friday, October 13th, 2017 from 6 PM- 9 PM.   This awesome event is planned and organized by students and this year Adrienne Titus is chairing.   Students have scheduled a fun night of fundraising with silent and baked goods auctions and the return of the diinga draw.   If you don’t know what a diinga draw is, you should plan on joining us Friday to find out!   We would love to see everyone come out and support this great event. 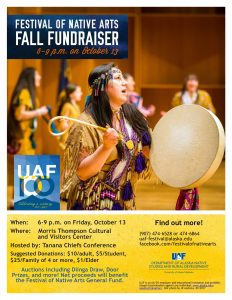 A Student Organized and Led Event

Festival has had a student at the helm as a student coordinator for years.   Recently, because the job demands an immense amount of time and energy, two students have split the position.   The positions are currently held by UAF students, Shelby Fisher-Salmon and Caity Tozier. The event is planned and organized through the Festival of Native Arts student club, led by the student coordinators.   The club is where the students meet to plan and divide the tasks that need to happen at the volunteer level. Two of DANSRD’s faculty, Cathy Brooks and Kathleen Meckel, serve as faculty advisors to the Festival of Native Arts student group and also co-teach ANS 251/351 Practicum in Native Cultural Expression where students can receive credit for taking leadership roles in making Festival happen. We watch the students mature and do great things and then graduate on us!   Upon graduation, the process repeats itself with an ever-growing number of UAF alumni having been a part of this historic event.

The event also requires staff support especially surrounding fiscal processes and procedures.   Despite recent staff reduction, DANSRD still offers that support through Office Manager, Sherrie Rahlfs. The Festival is a massive undertaking that requires dedication from the students, staff, and faculty overseeing the Festival.   The planning and logistics now require year-round time.   The students acquire skills and organize everything from stage events to hotel hospitality.   Of course, putting on an event like this costs money.   Festival has a long tradition of grass-roots support and students continue that tradition through various fundraising efforts. We are grateful for the many supporters and sponsors over the years.   Stories have been shared about how students in the early days went door-to-door on campus, collecting change from other students in hopes of raising enough funds for Festival.   Times have changed and now supporters can donate online through the UA Foundation.

A Little Bit of History

When Festival came to DANSRD, staff and students spent time sifting through the document boxes.   Recordings, photos, and several booklets do exist, but unfortunately, a comprehensive history of the Festival has yet to be written.   It is a massive history project full of stories rich for retelling. For example, over the years Festival has been organized a variety of ways.   The earlier celebrations were located in the Wood Center and held over a week with each day highlighting a specific culture.   The current three-day Festival hosts daytime workshops in the Wood Center but evening performances in the Davis Concert Hall with a mix of Indigenous cultures every evening.   Despite the changes, UAF students have been key to making the event happen — even exist. We hope to continue to explore and document this rich history.

We look forward to seeing everyone at the Fall Fundraiser this Friday and then again March 1-3, 2018!