DANSRD students from my class RD 475 Senior Project, Eric Petersen, Pamela Murphy, and Debbie Demientieff, presented on their senior projects at the Alaska Native Studies Conference in Juneau April 14-15. The students did a great job and got feedback and questions throughout the conference about their projects, already making a difference through their scholarship! 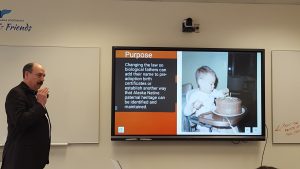 Alaska Native Child Adoption Alaska Native children have been adopted out from their biological families, communities, and cultures for decades creating generations of Alaska Natives disconnected from their cultures. While there has been significant progress made since 1978 when the Indian Child Welfare Act (ICWA) was enacted there are still issues that need to be resolved. One significant problem is that biological fathers that are not on the pre-adoption birth certificate are unable to put their name on the child’s birth certificate after the adoption is finalized. This causes a void in the child’s connection to their culture as well as impacting possible benefits from increased blood quantum. This project explores this issue and suggests possible solutions to solve the problem. 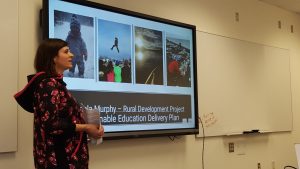 The Bristol Bay Campus faces the burning question of how to get post-secondary, relevant, education to remote locations in rural Alaska for all its 42 communities in a way that is sustainable over time. Within the Bristol Bay Region there is a high priority for quality education to prepare youth with skills to succeed in college or vocational schools. Title III funding was recently awarded to the Bristol Bay Campus to develop sustainable programs for Dillingham and its outlining service area to accomplish this vision. The purpose of this project is to establish a Sustainable Delivery Education plan, starting with the mobile welding lab pilot project. This mobile welding lab will feature covered welding stations in a shipping container and start off in the community of St. Paul, Alaska.

Debbie Demientieff: Portraits of Resilience: Celebrating Who We Are 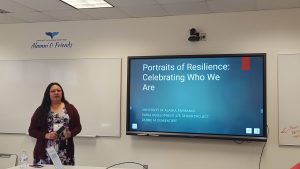 Our traditional value of taking care of our people is essential to this project. Traditionally people have natural role models that exemplify a good way of being, a good way of living. These role models or mentors were naturally known as tribes lived close in kinship and as a community. Now, in a world where families live apart from their tribal lands and their community it is important to share the success of Alaska Native people. People who are living a good life must be uplifted and serve as a good story for others to gain their own understanding of what they themselves are capable of achieving as Alaska Native people. Today, it is important to identify these leaders and role models so that others who may never get to meet them personally are able to learn from their experiences through their stories. This project explores the use of oral history as a means of documenting and sharing Alaska Native achievement and success as a guide for others to excel and reach their own personal level of success. They will be able to look at the experiences of successful people and know that they too can make the effort to realize their own goals.

I am so proud of these students! 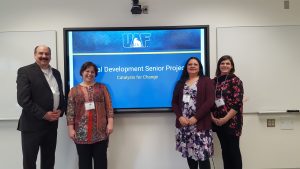 “If a language is used by all ages, it is considered safe. If there are no speakers it is extinct.’   (UNESCO Pillars of Language Revitalization)

There are currently many different models of language programs in Alaska, Canada, North America and Internationally. What can we learn from what is already happening in other Indigenous communities? Next semester I am teaching ANS F393  Indigenous/Alaska Native Language and Culture Revitalization (registration information below)). In this class, we will explore issues of language loss and how cultural and language revitalizations is a source of healing and empowerment. We will explore examples of International Language Revitalization experiences and Alaska Native examples and perspectives. We will also explore different programs and methods being used in communities today. It is now up to us as the next generation to ensure our languages remain vital into the next century.

“It is estimated that, if nothing is done, half of the over 6,000 languages spoken today will disappear by the 21st century’ (UNESCO.org).  Alaska Native communities and Indigenous people world-wide have been working hard to ensure their language is not one of those statistics. When I lived and worked in Canada, I witnessed how First Nation’s people are working to preserve, protect, and maintain their languages. I was lucky enough to travel to New Zealand with Hawaiian elders to observe how Maori people started Kohanga reo’s (“language learning nests’) to revitalize their languages. My own community is working to document our Tlingit language dialect. Recently we have suffered the loss of several fluent elders.

Maintaining a language is hard work; it will require everyone in the community to work together. Language has to be taught and used not only at school, but at business, at home, and in the community. A language is only considered “safe’ if it is used by all ages, from children on up; if everyone is speaking the language; if it is used in everyday places; if it is being used in a modern way via computer, internet; and materials are widely available and incorporated in schools (UNESCO Pillars of Language vitality). Richard Littlebear states in “Some Rare and Radical Ideas for Keeping Indigenous Languages Alive’:

Indigenous people argued that our languages is a human right and Richard Littlebear states that our “language is the basis of sovereignty’. Alaska Native people have won the right to have election materials translated into Gwich’in and Yupik. And our languages have been officially recognized. We need our languages to continue our ceremonies, rituals, songs and dances.

ANS 393 Indigenous/Alaska Native Language and Culture Revitalization
T/R 5:10 to 6:40 on campus and by audio-conference for distance students.